Hit enter to search or ESC to close

The Eighth Judicial Circuit is one of twenty trial court circuits in the State of Florida. The Circuit included the counties of Alachua, Baker, Bradford, Gilchrist, Levy and Union, and spans from the Gulf Coast to the Georgia border. The Eighth Circuit has thirteen circuit judges and ten county court judges. They are assisted by general magistrates and hearing officers in the adjudication and disposition of cases. More information on the structure of Florida’s court system can be found here. 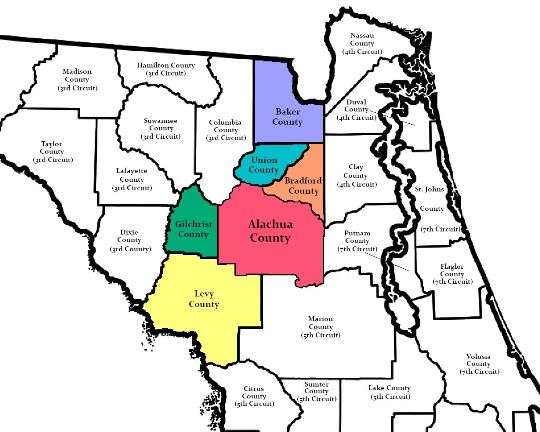 Florida Legislature created the Eastern (Judicial) Circuit, comprising “All that part of the State of Florida lying to the east of the Suwannee River and north of the Southern Circuit.” The Eastern Circuit included Alachua, Columbia, Duval, Levy, Marion, Nassau, Orange and St. Johns counties.

Alachua, Columbia, Nassau, New River (now Bradford), Levy and Suwannee were transferred from the Eastern Circuit to the Suwanee Circuit.

Baker County was created from New River (now Bradford) County, and added to the Suwanee Circuit.

Union County was created from Bradford and made part of the Eighth Judicial Circuit. Flagler County was also incorporated into the Circuit at this time.

Gilchrist County was created from Alachua County and incorporated into the Eighth Judicial Circuit.

Much has changed for the Eighth Judicial Circuit, yet geographically, the Circuit remains the same.